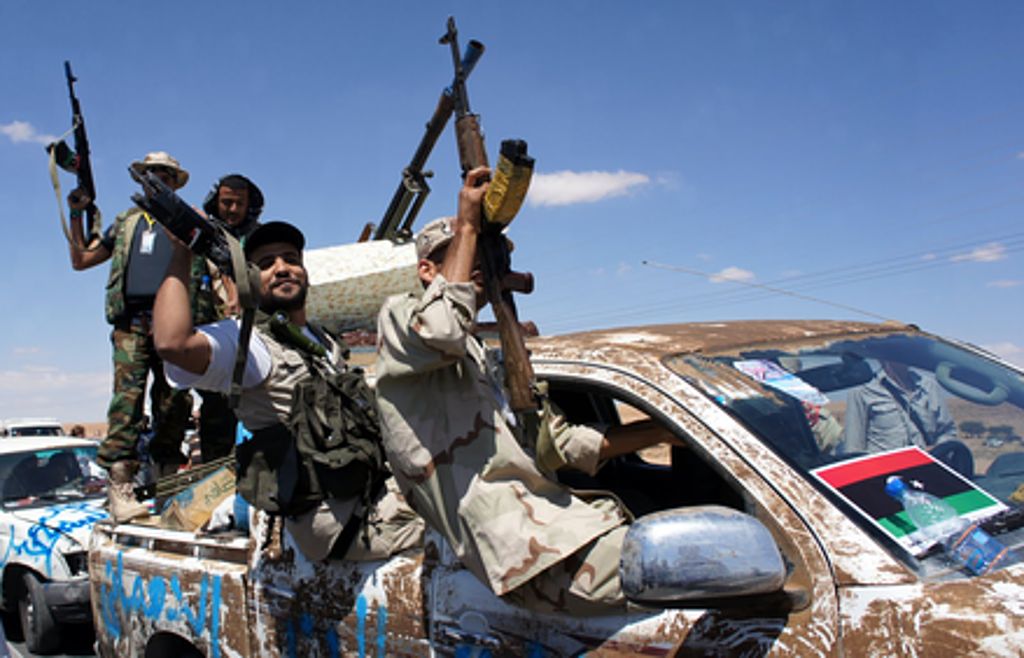 Throughout the Libyan War there were widespread reports of field executions and torture of black Libyans carried out by militias aligned with the National Transition Council (some NTC aligned fighters shown above; Source: Wikimedia Commons).

The New Year’s Eve release of over 3000 new Hillary Clinton emails from the State Department has CNN abuzz over gossipy text messages, the “who gets to ride with Hillary” selection process set up by her staff, and how a “cute” Hillary photo fared on Facebook.

But historians of the 2011 NATO war in Libya will be sure to notice a few of the truly explosive confirmations contained in the new emails: admissions of rebel war crimes, special ops trainers inside Libya from nearly the start of protests, Al Qaeda embedded in the U.S. backed opposition, Western nations jockeying for access to Libyan oil, the nefarious origins of the absurd Viagra mass rape claim, and concern over Gaddafi’s gold and silver reserves threatening European currency.

Under attack from allied Air and Naval forces, the Libyan Army troops have begun to desert to the rebel side in increasing numbers. The rebels are making an effort to greet these troops as fellow Libyans, in an effort to encourage additional defections.

(Source Comment: Speaking in strict confidence, one rebel commander stated that his troops continue to summarily execute all foreign mercenaries captured in the fighting…).

While the illegality of extra-judicial killings is easy to recognize (groups engaged in such are conventionally termed “death squads”), the sinister reality behind the “foreign mercenaries” reference might not be as immediately evident to most.

While over the decades Gaddafi was known to make use of European and other international security and infrastructural contractors, there is no evidence to suggest that these were targeted by the Libyan rebels.

There is however, ample documentation by journalists, academics, and human rights groups demonstrating that black Libyan civilians and sub-Saharan contract workers, a population favored by Gaddafi in his pro-African Union policies, were targets of “racial cleansing” by rebels who saw black Libyans as tied closely with the regime.[1]

Black Libyans were commonly branded as “foreign mercenaries” by the rebel opposition for their perceived general loyalty to Gaddafi as a community and subjected to torture, executions, and their towns “liberated” by ethnic cleansing. This is demonstrated in the most well-documented example of Tawergha, an entire town of 30,000 black and “dark-skinned” Libyans which vanished by August 2011 after its takeover by NATO-backed NTC Misratan brigades.

These attacks were well-known as late as 2012 and often filmed, as this report from The Telegraph confirms:

After Muammar Gaddafi was killed, hundreds of migrant workers from neighboring states were imprisoned by fighters allied to the new interim authorities. They accuse the black Africans of having been mercenaries for the late ruler. Thousands of sub-Saharan Africans have been rounded up since Gaddafi fell in August.

It appears that Clinton was getting personally briefed on the battlefield crimes of her beloved anti-Gaddafi fighters long before some of the worst of these genocidal crimes took place.

The same intelligence email from Sydney Blumenthal also confirms what has become a well known theme of Western supported insurgencies in the Middle East: the contradiction of special forces training militias that are simultaneously suspected of links to Al Qaeda.

Blumenthal relates that “an extremely sensitive source” confirmed that British, French, and Egyptian special operations units were training Libyan militants along the Egyptian-Libyan border, as well as in Benghazi suburbs.

While analysts have long speculated as to the “when and where” of Western ground troop presence in the Libyan War, this email serves as definitive proof that special forces were on the ground only within a month of the earliest protests which broke out in the middle to end of February 2011 in Benghazi.

By March 27 of what was commonly assumed a simple “popular uprising” external special operatives were already “overseeing the transfer of weapons and supplies to the rebels” including “a seemingly endless supply of AK47 assault rifles and ammunition.”

Yet only a few paragraphs after this admission, caution is voiced about the very militias these Western special forces were training because of concern that, “radical/terrorist groups such as the Libyan Fighting Groups and Al Qa’ida in the Islamic Maghreb (AQIM) are infiltrating the NLC and its military command.”

The Threat of Libya’s Oil and Gold to French Interests

Though the French-proposed U.N. Security Council Resolution 1973 claimed the no-fly zone implemented over Libya was to protect civilians, an April 2011 email sent to Hillary with the subject line “France’s client and Qaddafi’s gold” tells of less noble ambitions.

Most astounding is the lengthy section delineating the huge threat that Gaddafi’s gold and silver reserves, estimated at “143 tons of gold, and a similar amount in silver,” posed to the French franc (CFA) circulating as a prime African currency. In place of the noble sounding “Responsibility to Protect” (R2P) doctrine fed to the public, there is this “confidential” explanation of what was really driving the war [emphasis mine]:

This gold was accumulated prior to the current rebellion and was intended to be used to establish a pan-African currency based on the Libyan golden Dinar. This plan was designed to provide the Francophone African Countries with an alternative to the French franc (CFA).

(Source Comment: According to knowledgeable individuals this quantity of gold and silver is valued at more than $7 billion. French intelligence officers discovered this plan shortly after the current rebellion began, and this was one of the factors that influenced President Nicolas Sarkozy’s decision to commit France to the attack on Libya.)

Though this internal email aims to summarize the motivating factors driving France’s (and by implication NATO’s) intervention in Libya, it is interesting to note that saving civilian lives is conspicuously absent from the briefing.

Instead, the great fear reported is that Libya might lead North Africa into a high degree of economic independence with a new pan-African currency.

French intelligence “discovered” a Libyan initiative to freely compete with European currency through a local alternative, and this had to be subverted through military aggression.

The Ease of Floating Crude Propaganda

Early in the Libyan conflict Secretary of State Clinton formally accused Gaddafi and his army of using mass rape as a tool of war. Though numerous international organizations, like Amnesty International, quickly debunked these claims, the charges were uncritically echoed by Western politicians and major media.

It seemed no matter how bizarre the conspiracy theory, as long as it painted Gaddafi and his supporters as monsters, and so long as it served the cause of prolonged military action in Libya, it was deemed credible by network news.

Two foremost examples are referenced in the latest batch of emails: the sensational claim that Gaddafi issued Viagra to his troops for mass rape, and the claim that bodies were “staged” by the Libyan government at NATO bombing sites to give the appearance of the Western coalition bombing civilians.

In a late March 2011 email, Blumenthal confesses to Hillary that,

I communicated more than a week ago on this story—Qaddafi placing bodies to create PR stunts about supposed civilian casualties as a result of Allied bombing—though underlining it was a rumor. But now, as you know, Robert Gates gives credence to it. (See story below.)

Sources now say, again rumor (that is, this information comes from the rebel side and is unconfirmed independently by Western intelligence), that Qaddafi has adopted a rape policy and has even distributed Viagra to troops. The incident at the Tripoli press conference involving a woman claiming to be raped is likely to be part of a much larger outrage. Will seek further confirmation.

Not only did Defense Secretary Robert Gates promote his bizarre “staged bodies” theory on CBS News’ “Face The Nation,” but the even stranger Viagra rape fiction made international headlines as U.S. Ambassador to the UN Susan Rice made a formal charge against Libya in front of the UN Security Council.

What this new email confirms is that not only was the State Department aware of the spurious nature of what Blumenthal calls “rumors” originating solely with the rebels, but did nothing to stop false information from rising to top officials who then gave them “credence.”

It appears, furthermore, that the Viagra mass rape hoax likely originated with Sidney Blumenthal himself.

[1] The most comprehensive and well-documented study of the plight of black Libyans is contained in Slouching Towards Sirte: NATO’s War on Libya and Africa (publ. 2012, Baraka Books) by Maximilian Forte, Professor Anthropology and Sociology at Concordia University in Montréal, Québec.